It is well established that hyperphosphorylation of tau is responsible for the neurofibrillary lesions found in these conditions, while Aβ, a cleavage product of the amyloid precursor protein (APP), is a main constituent of the plaques.

The interrelationship between hyperphosphorylated tau and Aβ has been well studied, however, new functions for tau in signaling and cytoskeletal organization have emerged that challenge previously held paradigms. Studies have also shown that reduction in tau prevents Aβ-dependent behavioral and cognitive deficits, suggesting that therapeutic interventions that alter the levels of tau may be beneficial.

The transcription factor specificity protein 1 (Sp1) is essential for the regulation of the APP and tau genes and their regulators, and studies have provided convincing evidence that either silencing of the Sp1 gene  or treatment of animals with tolfenamic acid (TA) lowers the expression of neurodegeneration-related biomarkers, reduces pathological burden, and improves cognition. We have identified a new mechanism of action for cerebral TA (Sp1 modifier), not shared by other NSAIDs.

Our strategy is to repurpose tolfenamic acid, a drug that has been used safely in humans for decades, and develop new analogs that will enhance action at multiple neurodegenerative targets and thus offer a broad spectrum of activity to address these multifactorial diseases.

Our analysis shows that only a small number of genes are responsive to Sp1, co-localized exclusively in neurons, particularly in aging brains, at a time when there is minimal neuronal growth or proliferative activity occurring in the brain.

Therefore, TA offers potential as a “repurposed drug” for rapid development with limited concerns about its toxicity in humans, and Sp1 is an ideal target that impacts multiple neurodegenerative pathways. We have used TA and its molecular target for the rational design and synthesis of novel derivatives and analogs as potentially improved drug candidates with better safety and efficacy profiles.

While many drugs have been tested for their efficacy in interrupting the amyloid pathway, little focus has been given to drugs that could interfere with the phosphorylation of tau or reduce its levels, and hence alter the formation of tangles.

Tangles are deposits of hyperphosphorylated tau and are also found in other neurodegenerative disorders that are referred to as tauopathies of which Alzheimer’s disease (AD) is the most common.

Gene Therapy in a Pill

It is becoming clear that research strategies and therapeutic protocols that focus on elimination of the toxic “end products” of neurodegeneration are unlikely to produce a significant disease modification. In all likelihood, considerable irreparable damage has occurred before the point when the toxic proteins accumulate in plaques and tangles. This may explain why therapies and biologics designed to selectively and specifically target amyloid and tau were not successful. NeuroTau Inc has adopted a  new approach that is unlike any other company. By identifying targets and events that are “upstream” of the final toxic products, NeuroTau products can intervene early when the functional damage may be reversible or even preventable.

NeuroTau has repurposed fenamates to represent a novel class of drugs that can impact amyloid and tau pathology by their unique ability to act as Sp1 modulators, in addition to their anti-inflammatory properties. Fenamates have been used in humans for decades and have a good safety profile. NeuroTau’s strategy aims at optimizing both the neurodegenerative and anti-inflammatory properties of its compounds and tailor them to specific neurodegenerative diseases. Sp1 is a neuronal transcription factor involved in AD pathology, whose mRNA and protein levels are elevated within the frontal cortex of AD patients as well as in animal models with AD-like pathology. In addition, Sp1 regulates the expression of tau, therefore, mutations on the Sp1 binding regions of the tau promoter decrease tau expression. Sp1 binding motifs were also found on the promoter regions of CDK5, p35 and p39. The hyperphosphorylation of tau is mediated by several kinases including cyclin-dependent kinase-5 (CDK5) and glycogen synthase kinase-3-beta (GSK3β). CDK5, a member of the cyclin-dependent kinase family, is responsible for the phosphorylation of tau on sites that are unusually hyperphosphorylated in AD and taupathies.

Generally, only a minority of genes (<1%) possess multiple GGGCGG sequences in their promoter region, and proteomic and transcriptomic studies reveal a very small subset of genes in the adult and aging brain are modulated by treatment with fenamates. Therefore, targeting Sp1 is an ideal and safe approach to lower tau levels, and such reduction is likely to impact post-translational modifications of tau, APP, and other neurodegenerative pathways thereby providing a mechanistic approach to reduce the pathological features of neurodegenerative diseases and enhancing cognitive improvement. 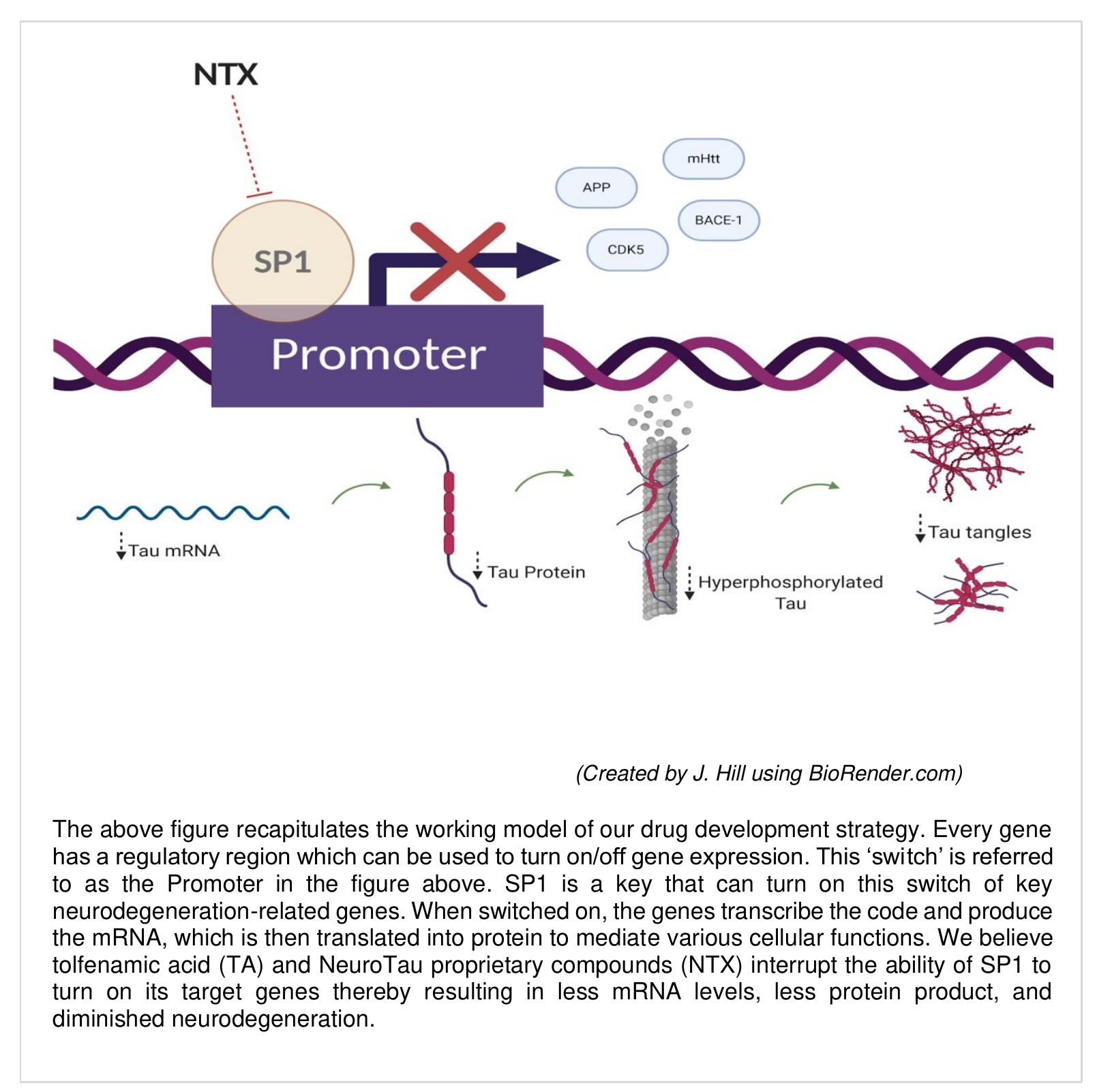